Hann Trier began his studies at the "Staatliche Kunstakademie" in Düsseldorf in 1934, graduating with a degree four years later in Berlin. After serving in the military, Hann Trier worked as a technical drawer in Berlin. In 1944 he was called up to serve another year as a soldier. In 1946 the artist returned to Rhineland, where he founded the "Donnerstagsgesellschaft" together with Toni Feldenkirchen, Hermann Schnitzler, Joseph Faßbender and others and organized a "Day of Abstract Art".
Hann Trier sought his own abstract image language, influenced by Paul Klee and Juan Gris' synthetic Cubism. The painter soon disengaged from the geometric austerity of colored areas and tried to depict the principle of speed and acceleration. Soon the line, which in his eyes depicts energy and movement, became an important element in his pictures. In this he can be associated with Hans Hartung, by whom he was strongly influenced during this period of his work.
From 1950 the artist frequently traveled to France, the US and Colombia, where he stayed from 1952 to 1955. There he tried painting with both hands, using two brushes in simultaneous repetitive movements, which soon became a principle of form.
Having returned to Germany in 1955, Hann Trier worked as a guest lecturer at the "Hochschule für Bildende Künste" in Hamburg. Two years later he moved on to the Berlin "Hochschule für Bildende Künste", where he taught until 1980. From approximately 1961 Hann Trier's act of painting has been centre line oriented. He produced symmetrical compositions, in which broad brush strokes where constructed to a differenciatedly modulated tone of color. In 1972 he painted the big ceiling picture in Charlottenburg castle, which was followed by another ceiling picture in the Cologne town hall in 1977-80. In 1984 he completed a third one in the German embassy in Rome. In 1985-86 he produced a large-format mural for the "Wallraf-Richartz-Museum"/"Museum Ludwig" in Cologne, followed by another one mounted in the staircase of the Wuppertal "Von-der-Heydt-Museum", which hosted a retrospective of his paintings in the same year.
Hann Trier received numerous awards, including the "Verdienstorden" of Northrhine-Westphalia in 1989. He participated in exhibitions regularly and took part in the "documenta" in Kassel several times. On the occasion of Trier's 75th birthday the Wuppertal "Von-der-Heydt-Museum" organised a retrospective of his paintings on canvas. 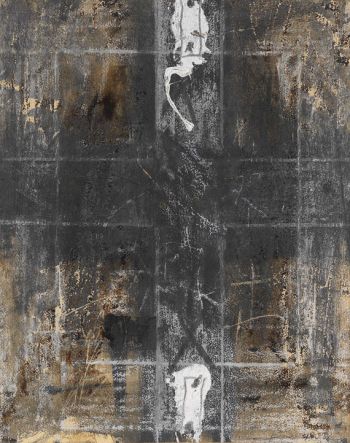 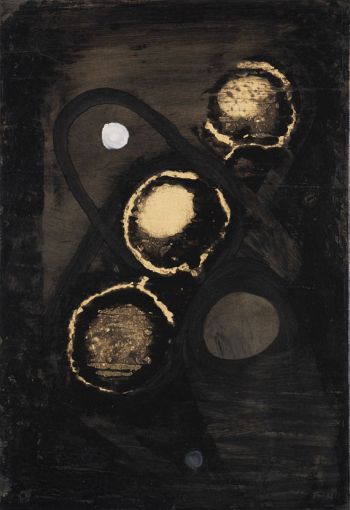 Would you like to sell a work by Hann Trier?